Find this article at:
go.ncsu.edu/readext?437518
— Written By Mike Munster 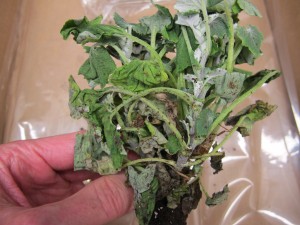 Last week the NCSU Plant Disease and Insect Clinic received three greenhouse samples of Pericallis x hybrida (florist’s cinerea) infected with Thielaviopsis basicola, the fungus that causes black root rot. Aboveground symptoms included stunting and wilting. The growers did not report leaf yellowing, which we often see when black root rot occurs on pansy or vinca. In two of these sample the lower stem had become infected, suggesting that the process had begun some weeks ago. In the third sample, the decaying lower stem was found to have a different fungus. 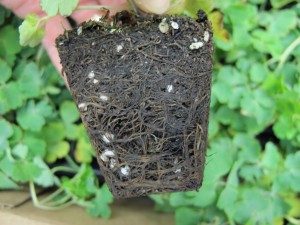 Darkened roots of columbine infected with Thielaviopsis basicola. Blackening is not usually this severe.

Symptoms of black root rot include yellowing foliage, wilting, stunting, and blackened roots (due to presence of the fungal spores).

Unfortunately there is no cure for black root rot, and the affected plants must be removed and destroyed, including the potting mix. Extreme care must be taken not to contaminate other plants or potting mixes in the process. Note that there may be infected plants that haven’t started showing symptoms yet, so if half or more of the crop is affected, growers should consider discarding the whole crop. The safest course of action is to discard the pots, too, but if they must be saved, they should first be scrubbed and washed thoroughly to remove any plant or soil debris and then sanitized. Benches that came in contact with the plants should also be disinfested. If they were grown on gravel or ground cloth, as much of the organic matter as possible should be removed, and the area dedicated to growing plant species not susceptible to Thielaviopsis. 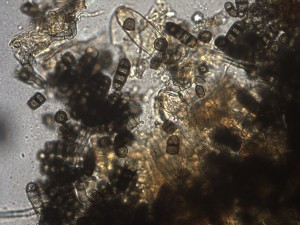 Tough microscopic spores of Thielaviopsis basicola allow it to survive in greenhouses between crops. They can also be spread by insects such as shore flies and fungus gnats.

Additionally, it is important to manage fungus gnats and shore flies as these insects can spread Thielaviopsis within a greenhouse. Most important of all, incoming plugs should be inspected carefully, as these are often a source of black root rot and other diseases.

Following laboratory confirmation of black root rot, growers may want to make fungicide drenches to prevent it from becoming a problem in healthy plants. If only a few plants are affected and the problem appears to have come in on recently acquired plant material, drenches can be done on any susceptible species that came from the same supplier. If infections appear to be spreading or persisting within the greenhouse, all susceptible species should be treated. Among ornamentals, susceptible crops include but are not limited to Aquilegia, Astilbe, Heuchera, Tiarella, Farfugium, Calibrachoa, Catharanthus, Kalanchoe (root and stem rot), true Vinca, Pericallis, Phlox subulata, Scabiosa, Viola (pansy/viola), and Japanese holly. It’s important to keep in mind that fungicides won’t cure established infections but can slow them down.

According to Ann Chase’s 2016 Guide to Ornamental Fungicides, both thiophanate-methyl (e.g. Cleary’s 3336 or OHP-6672, FRAC group 1) and polyoxin D (Affirm WDG, FRAC group 19) are very good to excellent against Thielaviopsis basicola. Rotate among different FRAC groups as a resistance management strategy. Other possible rotation partners include Medallion (FRAC group 12) and Terraguard (FRAC group 3) but may be less effective. Follow all label directions, and be sure to try any new fungicides or combinations of fungicides on a small set of plants first, to be sure they don’t cause stunting, yellowing, or burn. When applying thiophanate-methyl, avoid applying in mixture with copper-containing compounds or with strongly alkaline materials.

There could be possible benefits from the incorporation of a Trichoderma-based biological control like RootShield or RootShield Plus. Make sure your choice of fungicides is compatible with any biologicals you use. Trichoderma products must be applied at the time of transplanting (preventive) and not after symptoms of disease are apparent.

Optimizing growing conditions for plant growth and maintaining the pH of the planting medium below 5.5 may reduce severity of black root rot.