This year, some North Carolina fields may have high levels of Fusarium head blight (scab). Scab causes low yields and test weights. Loads of scabby grain may be docked or rejected because of mycotoxins, especially deoxynivalenol, also known as DON or vomitoxin. Information about using resistant varieties and fungicides to manage scab is in the Diseases chapter (#12) of the North Carolina Small Grains Production Guide.

1. How do I recognize scab in wheat? Scout before the heads turn golden. Partly bleached, partly green heads are probably scabby. If 10% or more of all the spikelets (individual parts of the head) are bleached, you are likely to have troublesome DON levels. 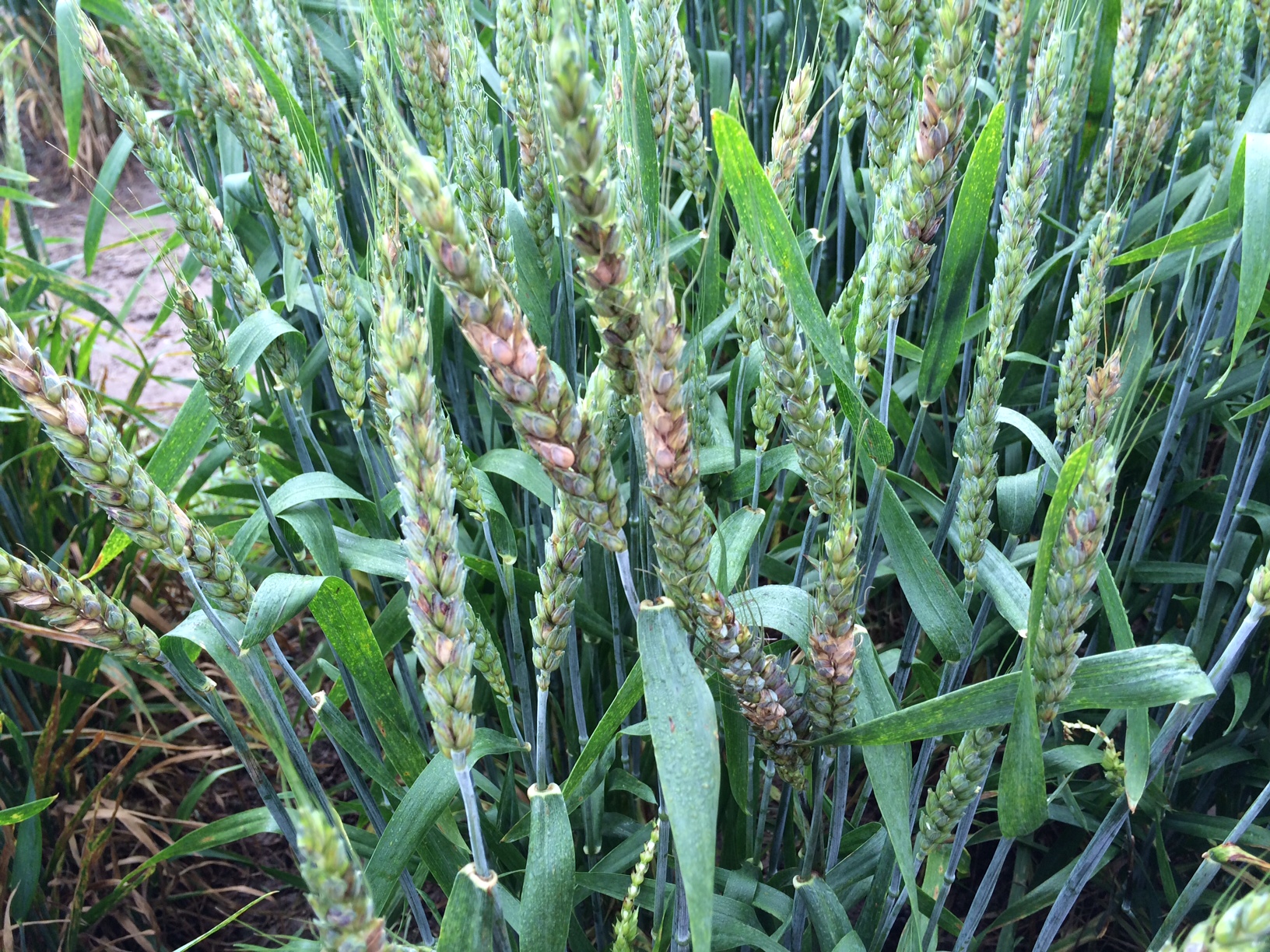 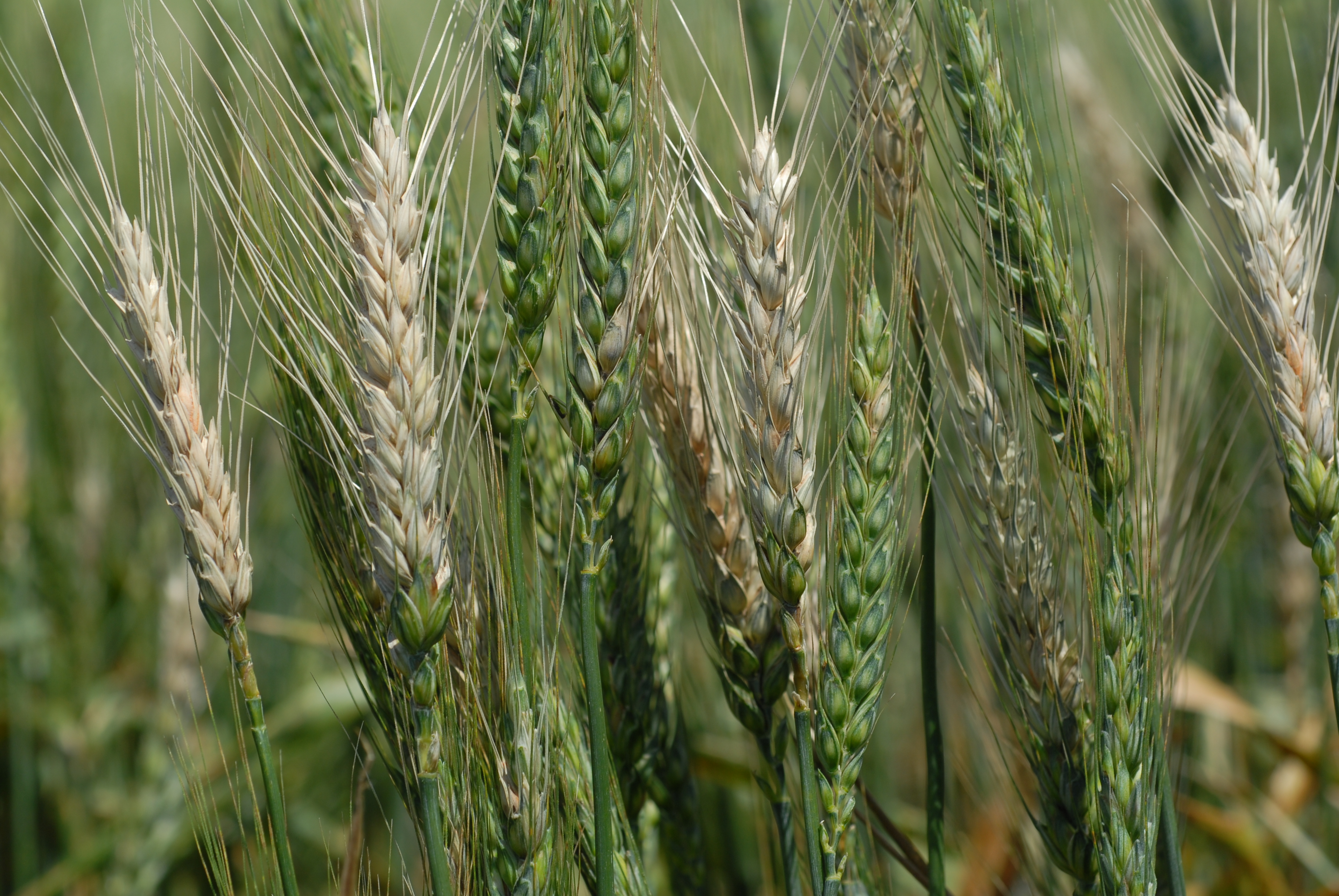 2. What is DON or vomitoxin? DON is a toxin produced by the fungus Fusarium graminearum. Consuming DON can affect the health of humans and many animals. DON can also affect baking quality and flavors in foods. Grain buyers differ in DON testing and dockage schedules; many will dock when DON levels reach 2 or 5 parts per million (ppm).

3. How does DON affect livestock? DON causes feed refusal and poor weight gain in livestock. Swine are most sensitive to DON, even at one part per million (1 ppm) contamination of hog feed. Cattle, sheep and poultry are more tolerant of DON. Diluting scabby wheat with normal quality grain may be a logical method of feeding wheat safely to on-farm livestock.

4. What are safe levels of DON? The Food and Drug Administration has established DON advisory levels as follows:

5. How can I determine if grain has DON? Determining the presence and amount of DON in infected grain requires a chemical test. There are a variety of commercial laboratories and quick test kits for mycotoxin analysis. In North Carolina, a small-grain sample may be sent for DON testing with a check payable to “NCDA” for $38.50 to:  Mike Brock, NC Department of Agriculture, 407-G South Griffin St., Elizabeth City, NC 27909; Phone 252-337-9782. A sample of about 3.3 lbs is preferred.

6. How should I adjust the combine if my field has high levels of scab and DON? Research at the Ohio State University showed that adjusting the combine fan speed to between 1,375 and 1,475 RPM and the shutter opening to 90 mm (3.5 inches) resulted in the lowest discounts at the elevator due to low test weight, % damaged kernels, and DON in the harvested grain (Salgado et al., 2011, “Grain harvesting strategies to minimize grain quality losses due to Fusarium head blight in wheat,” Plant Disease, 95:1448-1457.)

7. Will drying and/or storage reduce scab or DON levels in grain? No. DON is a stable mycotoxin; drying and/or storage will not reduce DON levels in the infected grain. If handled properly, DON levels will not increase once grain is harvested and stored. The fungus requires 22 to 25% moisture content to grow. At moisture levels below 18%, the fungus will not continue to grow. Moisture content of scabby grain going into storage should be below 13%. There is no evidence of DON from scabby grain continuing to increase, if grain is stored at appropriately low moisture.

8. How should DON-contaminated grain be stored? When storing scabby grain, try not to mix it with good-quality wheat. The light, thin kernels caused by scab tend to accumulate in the center of a storage bin, and hot spots may occur if higher-moisture fine material is present in the core as well. Using a cleaner to remove fines from the wheat before binning and a grain spreader to distribute scabby kernels more evenly will minimize spoilage risks. If a cleaner and a spreader are not available, the wheat should be cored as soon after binning as possible. Fields being double cropped with soybeans could be at higher moisture at harvest than in normal years. If the grain is being dried in-bin with unheated air, the grain moisture at harvest should be below 18%. With scabby grain, it may be necessary to increase the rate of air flow to decrease the drying time. This can be achieved by reducing the depth of grain in the drying bin below normal levels. For example, a grain depth reduction by 25% from 12 ft to 9 ft will increase the airflow through wheat from a 10 HP fan by 50%. If the harvest moisture is above 20%, it will be necessary to use heated air in either bin or column dryers.

9. Should I plant back scabby wheat next fall? The Fusarium fungus infects small-grain kernels, leading to low test weights and low germination rates. Planting back scabby seed will result in thin stands. The more scab your crop has this year, the more you should buy certified seed for the next crop. Your seed should have a test weight of at least 58 lbs. per bushel and a germination rate of at least 90%. If seed from scabby fields is planted back, it should be cleaned thoroughly and treated with Dividend or Raxil. However, seed treatment will only provide a 5% boost in germination and a 2-3 bushel per acre boost in yield, on average. This will not be sufficient for seed with low test weight and poor germination. Planting scabby wheat seed will not cause a head scab epidemic next year; infected corn and small-grain debris is the source of fungal spores for a potential future epidemic. Of course, some wheat varieties are patented and may not legally be saved for replanting anyway.

(Partially based on an article by Kiersten Wise and Charles Woloshuk, Purdue University, June 2014)