Find this article at:
go.ncsu.edu/readext?300123
— Written By Lina Quesada-Ocampo

Cucurbit anthracnose has shown up on watermelon at the Coastal Research and Education Center (CREC) in Charleston, SC. The field was cropped to watermelon in fall 2013, and that crop had severe anthracnose.

Why did anthracnose start this early in the season in this field? Most importantly, the severe anthracnose last fall guaranteed that plenty of spores would appear on infested crop debris this spring. Watermelon vines last at least 7 months, even when buried by tillage, and the anthracnose fungus probably lasts as long.

Anthracnose prefers the slightly cooler weather South Carolina has had during the past week. Temperatures between 64 and 81°F. are ideal for infection. Once the fungus gets into the leaves, it keeps growing as long as temperatures are 90°F. or lower.

Anthracnose also needs moisture. The recent, cooler nights with below average temperatures ensured a long, heavy dew period. Anthracnose can develop any time leaves are wet for 2 hours. When leaves stay wet for 12–24 hours, the risk of disease is much greater.

Anthracnose on watermelon starts as small, irregular, dark brown spots on leaves that are ¼ inch in diameter. These spots enlarge, more spots appear, and entire leaves are killed. 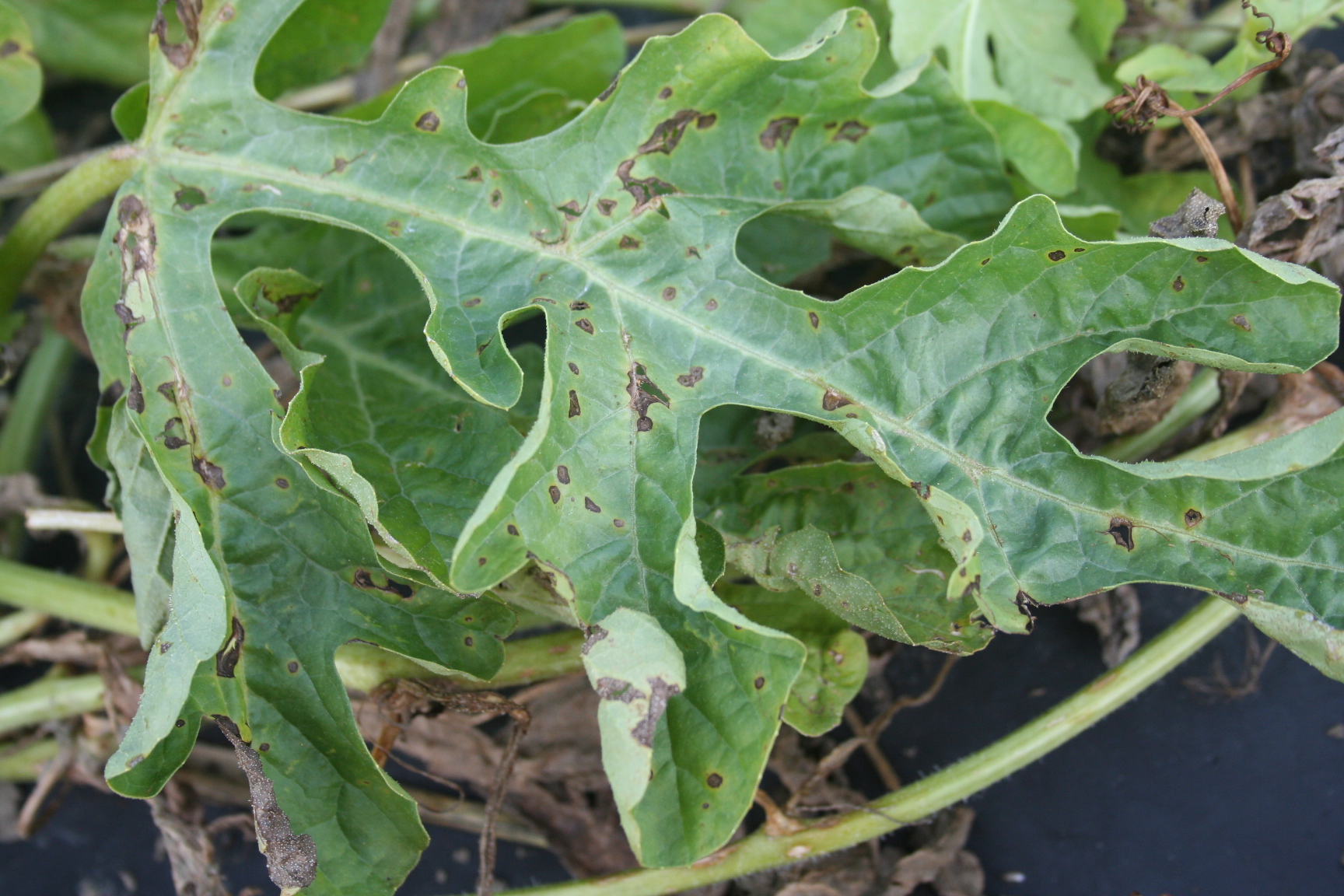 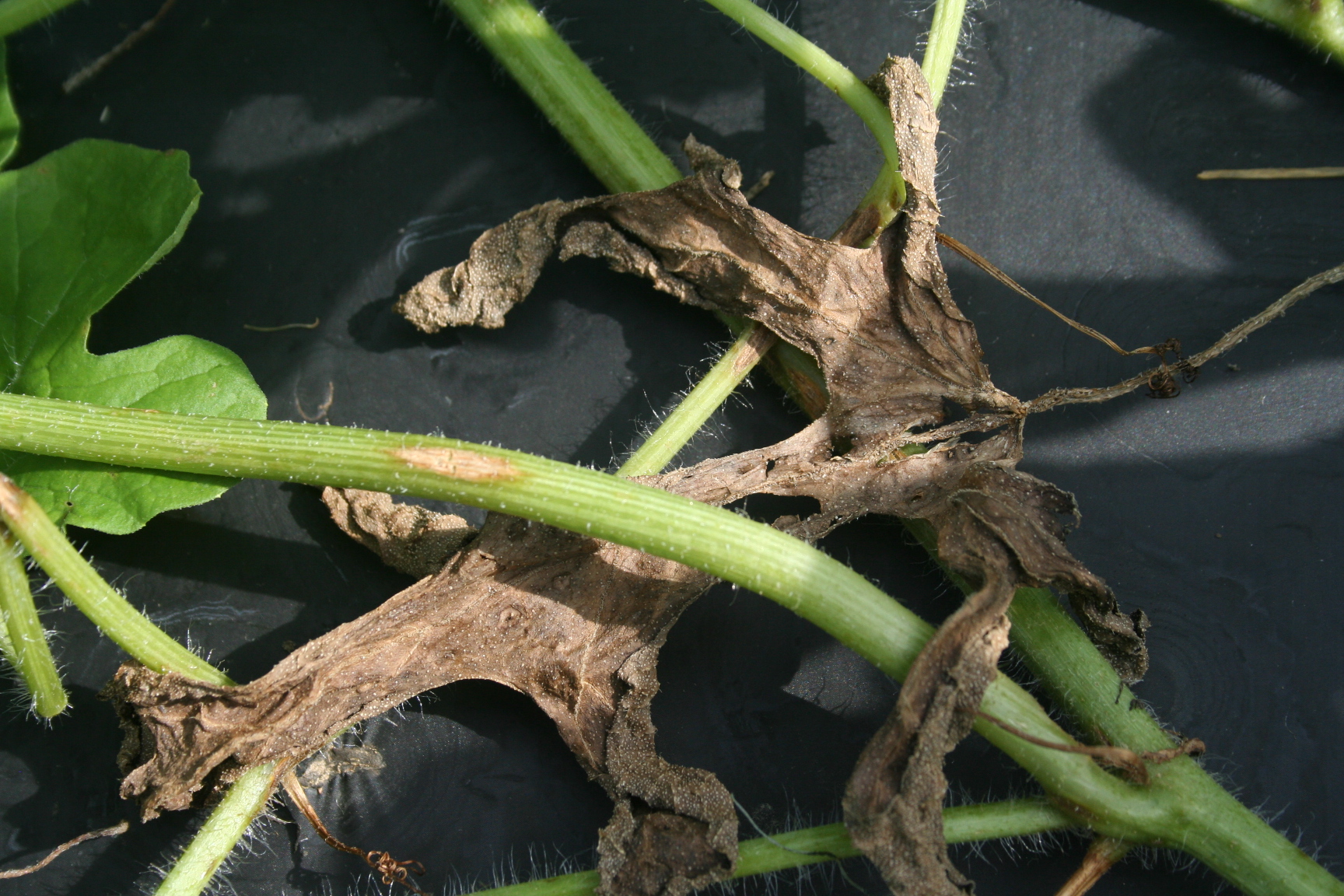 Finally, sunken, brown spots show up on the top and the bottom of fruit. Spots on the bottom are usually larger and deeper. The fruit spots may be covered with salmon-orange fungus growth. 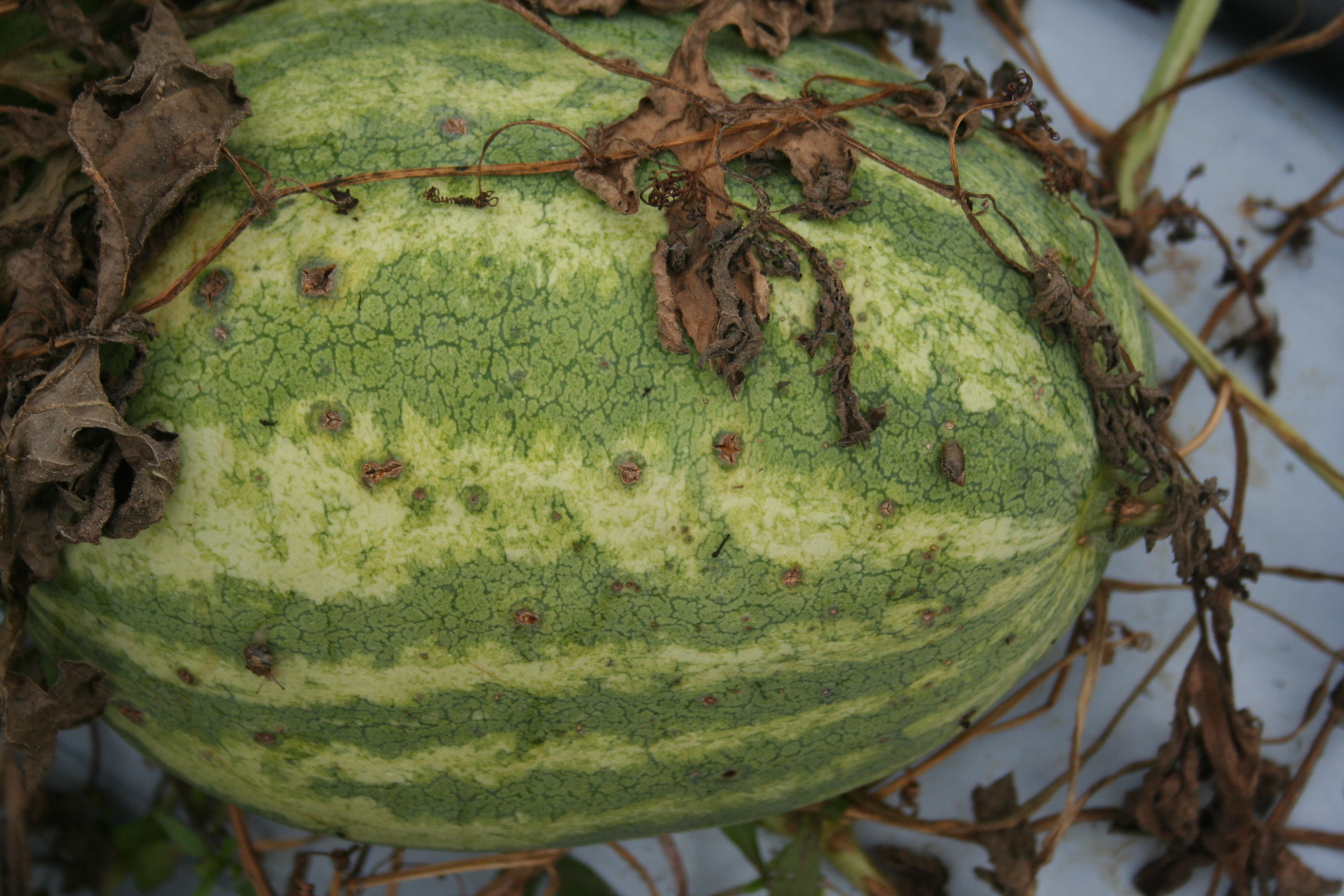 A spray trial I did in fall 2013 at Coastal REC showed that almost any fungicide with an active ingredient in Group 11 controls anthracnose. This list includes Cabrio, Pristine, Quadris, Quadris Top, and Luna Sensation. One of these fungicides should be sprayed as soon as anthracnose is found in a field.

Both mancozeb (Dithane, Manzate, or Penncozeb) and chlorothalonil (Bravo, Echo, Catamaran) help prevent anthracnose when sprays are started before the disease is found. Growers who have been following the SC Watermelon Spray Guide for 2014 are “ahead of the curve” at this point. If anthracnose shows up, the next scheduled spray should be a fungicide specifically recommended for anthracnose.

Biofungicides and fungicides approved for NOP organic certification do not control anthracnose.

Any field of watermelon (or muskmelon or cucumber) with anthracnose in 2014 should not be planted to any of these three crops until 2017. Two complete years are probably necessary for all of the anthracnose-infested crop debris to decay. Affected fields should be disked as soon as the last harvest is over. Fields with cucurbit anthracnose in the spring should never be double-cropped to another cucurbit in the fall, and the plastic mulch should not be reused for another cucurbit crop.