Find this article at:
go.ncsu.edu/readext?355045
— Written By Lina Quesada-Ocampo

Black rot of sweetpotato is caused by the seed and soil borne fungus Ceratocystis fimbriata. Root symptoms include large circular, brownish to black, dry rots (Fig. 1). Plant symptoms in the field include plant stunting, wilting, yellowing, leaf drop, and death. Infections start in the field but can further develop in storage and even small lesions in the root can cause devastating damage if conditions favor disease. In addition, asymptomatic but infected roots can develop a bitter taste. The pathogen can infect hosts closely related to sweetpotato such as morning glory, so removal of debris, volunteers, and weeds is desirable to prevent disease. Wounding can also favor infections, thus, controlling insects and pests will help in preventing black rot. Some literature also suggests that boron deficiency can favor black rot. Black rot has been a challenge for sweetpotato growers in past years and a disease of historical importance, however, the implementation of clean seed programs, planting disease free material, cutting slips above the soil line, treating seed with labeled fungicides, and rotating fields away from sweetpotato production for at least 4 years have dramatically reduced disease incidence. The black rot pathogen can be easily transmitted through contact, thus, sanitation of tools, packing line equipment, bins, wash tanks, etc., is important to prevent disease spread. For additional information about black rot management refer to our black rot fact sheet and previous black rot posts. 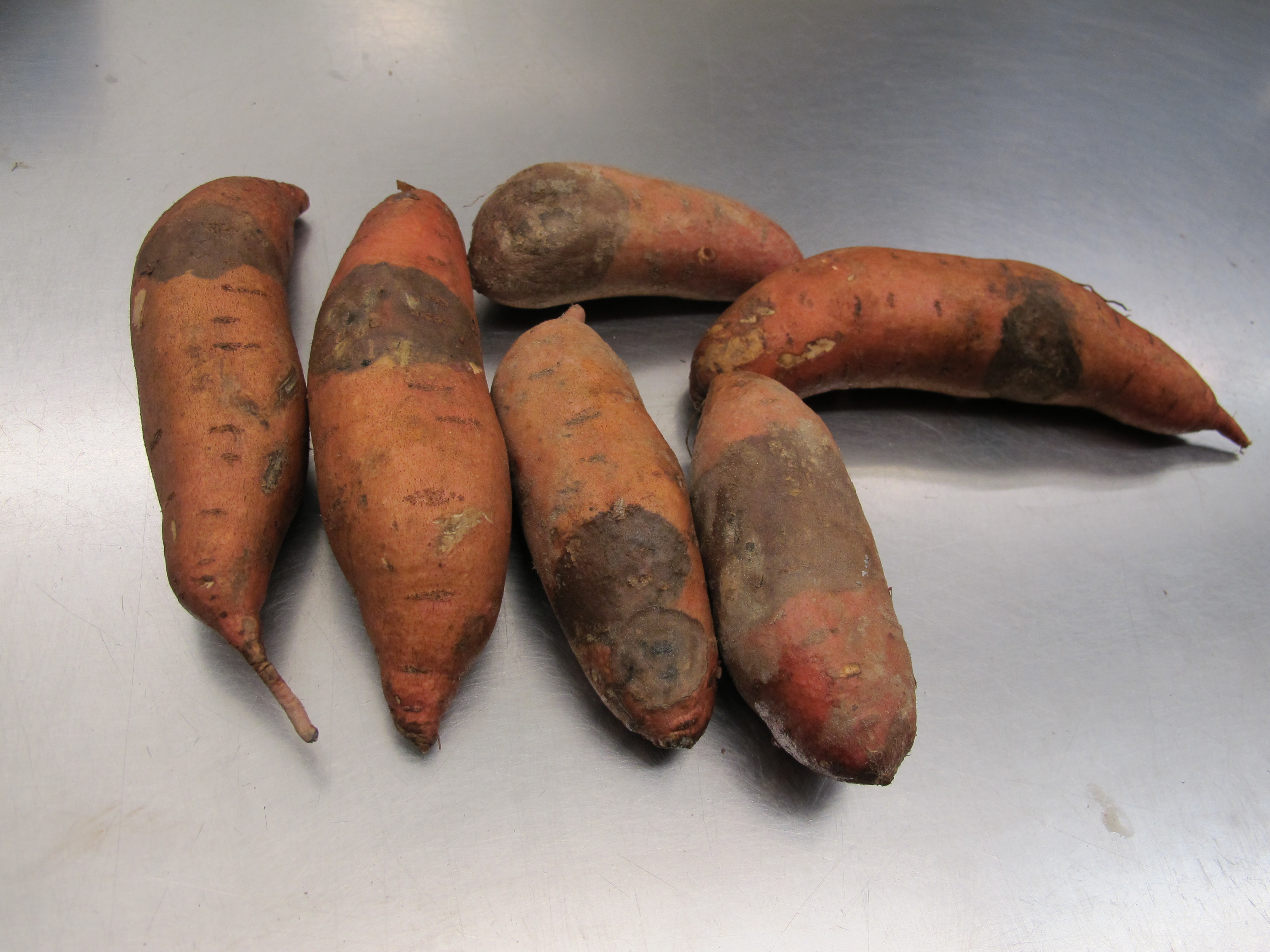 Scurf is caused by the fungus Monilochaetes infuscans, which infects sweetpotato and closely related hosts. It is a relatively common disease of sweetpotato that is mainly transmitted through planting of infected roots or slips. The disease can also be a persistent soilborne and survive in infested fields for 1 to 2 years. The pathogen is favored in fine-textured soils and soils with high organic matter, such as manure. Surf symptoms occur in the sweetpotato skin mainly as surface dark brown discoloration and lesions that harbor fungal spores; there are no above ground symptoms (Fig. 2). It is mostly a problem of root appearance, however, roots with scurf have been found to shrink during storage. Scurf can be easily confused with boron deficiency, which also presents as discolored skin but with raised lesions. Unlike black rot, scurf does not readily spread to healthy roots during storage, however, small lesions can become significantly larger during periods of high humidity. Scurf has been successfully managed by using disease free planting material, treating seed with labeled fungicides, avoiding infested fields, rotating bedding fields every year and planting fields 3 to 4 years, and cutting slips above the soil line. Roots with scurf infections should not be be used for seed or culled in or nearby planting fields. For additional information about scurf management refer to our sweetpotato scurf fact sheet. 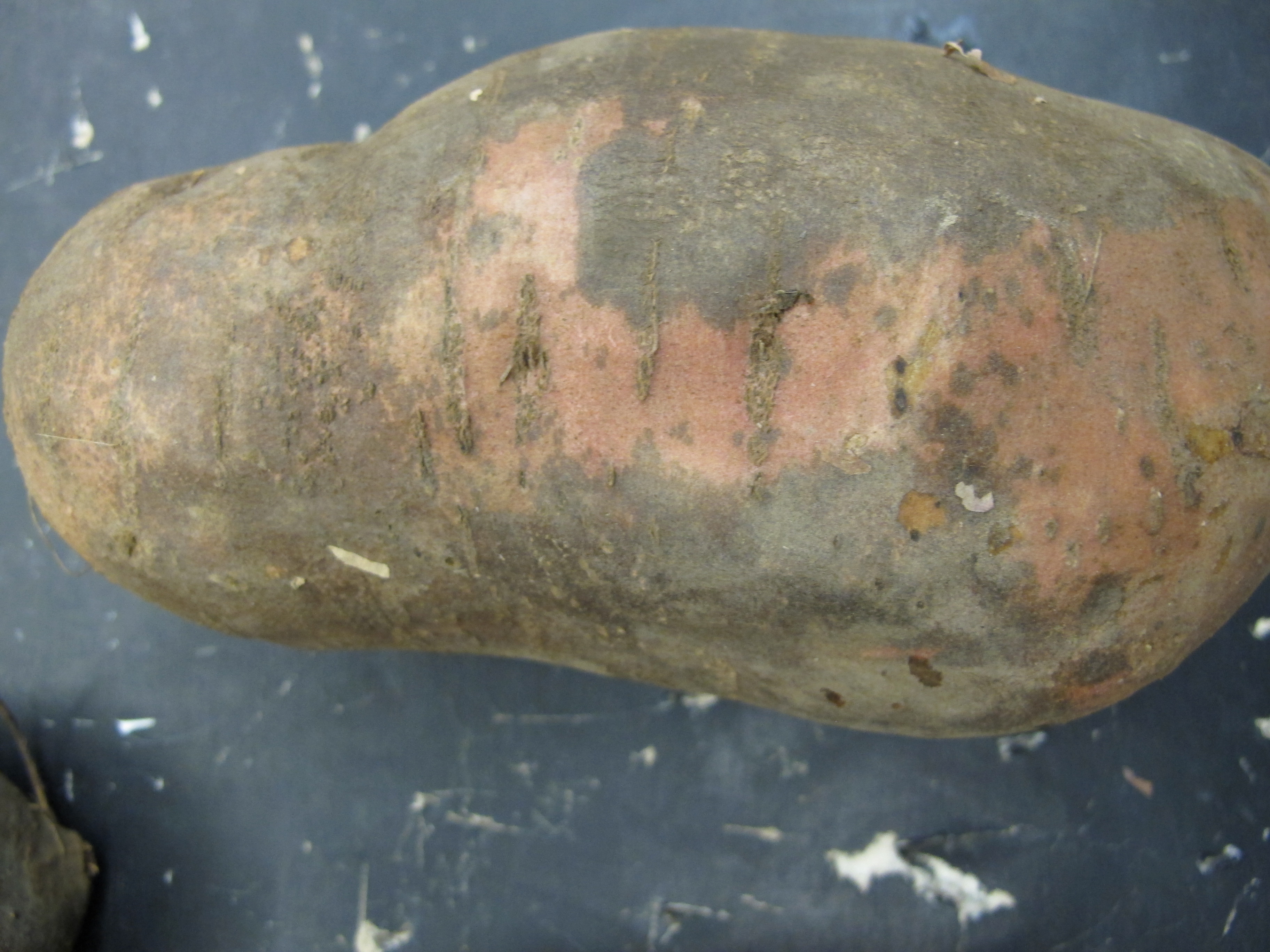 If you suspect black rot or scurf in your sweetpotatoes contact your local extension agent or submit a sample to the Plant Disease and Insect Clinic at NCSU to determine if you do have infection and obtain information about disease management.