Dickeya Dianthicola in the Production of Herbaceous Ornamentals

Find this article at:
go.ncsu.edu/readext?457210
— Written By Mike Munster 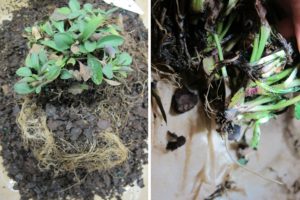 During March 2017 the NCSU Plant Disease and Insect Clinic confirmed the presence of the bacterium Dickeya dianthicola on multiple herbaceous ornamentals from a total of three growers. It was found causing a decay in Sedum and a lower stem rot in Argyranthemum and Coreopsis. In a second Coreopsis sample the bacterium was acting as a vascular wilt pathogen, causing dark streaks in the interior of the stems and death of the tips of lower leaves. Roots were not necessarily rotted.

Although officially a new report for North Carolina, this bacterium has almost surely been present in the state but identified as Dickeya chrysanthemi (a.k.a. Erwinia chrysanthemi), the species from which it was recently separated. Our ability to identify it now was made possible by a recent update to our Biolog system. Dickeya dianthicola is capable of infecting a wide range of plants, though some pathogenic specialization within the species is reported whereby not every strain has the same host range. One of the reasons this species has been of concern is that it can cause a disease resembling black-leg in potato. See last year’s bulletin about the situation from Rutgers University.

Unfortunately, there are no effective chemical controls for bacterial soft rot once established. Healthy propagative material, sanitation, avoiding wounds, and good water management are the first lines of defense. Avoid excess water and anything (including insects) that might wound the plants and thus give entry to bacteria, though they can probably infect through natural openings as well. Soft-rot bacteria can be spread from plant-to-plant by hand, insects, water splash, and even as aerosols. Avoid handling plants when wet, and frequently sanitize knives or other tools used on the plants. Erwinia chrysanthemi has been found in pond water associated with ornamentals nurseries, so be sure that your water sanitation systems are operating properly. If you suspect this disease, contact your county cooperative extension office about submitting a sample for diagnosis.