Find this article at:
go.ncsu.edu/readext?468957
— Written By Sara Villani

Across Western NC there have been numerous reports of apparently healthy trees mysteriously collapsing in young high-density apple orchards. Regardless of cultivar or dwarfing rootstock, the progression of tree decline has been fairly consistent throughout the region. Symptoms initially are unremarkable-foliage appears slightly wilted and is a slightly lighter green than unaffected trees (Fig. 1). However, within two weeks time tree vigor has declined substantially and appears as though it has succumbed to drought stress-often mimicking symptoms of fire blight or collar rot.

Capitalizing on the Weak

Through preliminary surveys conducted in 2017, so far two types of ambrosia beetles-the shot hole borer (Fig. 2A) and the tree pinhole borer- have been identified in nearly all trees with symptoms of rapid apple decline (RAD). While new to NC apple orchards, ambrosia beetles have long been familiar pests in pecans, woody ornamentals, and forest trees. Since 2013, apple growers in New York have been battling a different ambrosia beetle, the black stem borer (Fig. 2B), in their high-density plantings. Ambrosia beetles seldom attack healthy trees. Rather, they are attracted to ethanol vapors produced when trees are under abiotic stresses including flooding, drought, winter injury, and even pruning wounds. Ambrosia beetles attack apple trees by boring holes straight into the scion, and occasionally limbs, reaching the heartwood of the tree.

Unlike many wood-boring insects, ambrosia beetles are “fungal farmers” and cultivate fungal food for their future brood once inside the tree. Adult female beetles excavate tunnels or “galleries” and deposit a mutualistic fungus or fungi associated with particular beetle species inside the galleries. This fungus can grow in the apple tree and may either clog up the tree’s vascular tissue directly or cause vascular tissue to “wall off” in response to invasion leading to wilting and other familiar tree decline symptoms. Eggs are laid in the galleries and once hatched, grubs feed on the fungal farms and develop inside the tree.

Because of its small size (approx. 2-3 mm) and lifecycle, observing ambrosia beetles without actually destructing a tree is uncommon. Scouting for early tree decline or for evidence of beetle presence on the tree is more practical. On a calm day, a toothpick of sawdust may be observed emerging from entrance holes (Fig. 3B). Small entrance holes, the size of a pinhead, will be visible on the scion (Fig. 3A). Removing the bark around entrance holes will often reveal a zone of dead tissue. Blistering bark (Fig. 3C) has also been commonly observed in NC and NY orchards when ambrosia beetles are present.

Why the Sudden Emergence of Ambrosia Beetles?

It is said that hindsight is 20/20. It is highly likely that abiotic stress events that triggered an increase in ethanol production and subsequent ambrosia beetle attacks occurred last season, or were even initiated in 2015. As mentioned earlier in the article, conditions such as water stress and winter injury can cause an increase in ethanol production in trees. Compared to cumulative rainfall amounts in Henderson County NC in 2014, rainfall between April and September during 2015 and 2016 was considerably lower (Fig. 4). In orchards where irrigation was not installed or was not used appropriately, drought stress may have played a role in increased ethanol production. Above average temperatures during some winter months in 2015/16 and 2016/17 may have also resulted in unsatisfactory hardening off of apple trees and left them susceptible to injury during cold snaps. 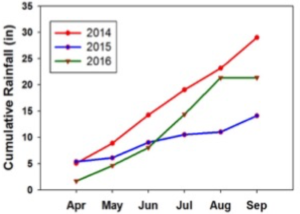 “I Have Trees Rapidly Declining, but don’t See Evidence of Ambrosia Beetles” 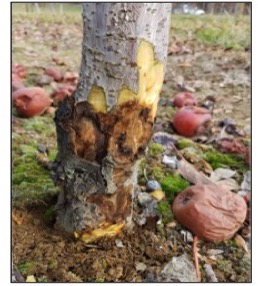 Figure 5. Death at graft union on apple tree with no evidence of ambrosia beetle damage.

Since 2014 young dwarfing apple trees planted in high-density systems have been suddenly collapsing throughout the eastern U.S. While rapid apple decline (RAD) can strike any time during the growing season, apple specialists have often observed collapse on apparently healthy trees carrying a full load of fruit. In 2016 RAD was observed in Western NC even in cases when no ambrosia beetles were detected. In these trees there was death at the graft union, while tissue above and below the union initially appeared healthy (Fig. 5). Wood rotting or opportunistic plant pathogens, that are able to capitalize on weakened or stressed trees were commonly isolated from the union region.

“How Worried Should I Be and What Can I do if I Suspect Ambrosia Beetles in my Orchard?”

Growers with young (2-6 years), high-density orchards should be the most concerned about ambrosia beetle infestations. We have yet to find beetles in more traditional growing systems. So far we have not found a strong connection between cultivar and/or dwarfing rootstock and declining trees, although when Honeycrisp trees are planted in a multi-cultivar block, beetles tend to have a preference for that cultivar. An orchard prone to flood or drought is also an increased risk factor. So far there have been inconsistent or negative results with insecticides and fungicides for the management of ambrosia beetle or its fungal farms in apple. There is some debate on whether the trees should be removed immediately or not. It is possible that infested trees can act as a trap crop to attract the beetles during the season where they can be removed during the winter.

What is the NCSU Apple Team Doing to Help?

Since April we have been conducting surveys in high-density orchards with reports of rapidly declining trees. The goals of this survey are to identify the types of ambrosia beetles and their associated fungi that are being “farmed’ in beetle galleries and to collect information on management practices and potential risk factors (i.e. cultivar, rootstock) in orchard blocks were RAD/beetle infestation is active. NCCARS and N.C. Cooperative Extension have provided emergency funding that will enable us to hire a technician for a 6-month period to assist in ambrosia beetle research efforts. A portion of the emergency funding is also being used to purchase virus testing kits. Teaming up with the NCSU Plant Disease and Insect Clinic trees showing RAD symptoms will be screened for 6 different viruses. In the coming weeks ethanol traps will be set near high-density orchards to gain more information on adult flight patterns. We hope that this preliminary research will help with generating greater funding through competitive grant programs.

If you think you may have an ambrosia beetle infestation, please notify the Henderson County Extension Center or contact Jim Walgenbach, Tom Kon, or Sara Villani at MHCREC.