Find this article at:
go.ncsu.edu/readext?517587
— Written By Sara Villani

The warm temperatures in Western NC during the past few weeks have caused green tip to arrive early on some apple cultivars throughout the region. Fortunately with predictions of cooler nights ahead, there should be a window of opportunity to catch up on any preseason or green-tip disease management practices you may have missed.

The primary goal of preseason disease management programs is reduce overwintering populations of bacterial and fungal pathogens. To survive the harsh conditions of winter, fungal and bacterial overwinter in locations that offer protection. Such locations may include cankered wood, bark crevices, mummified fruitlets, vegetative and flower buds, and for some fungi, ascocarps on diseased leaves along the orchard floor. Pruning fire blight cankers during the winter, when the pathogen is dormant, is critical for reducing canker blight, and thus reducing the risk of other stages of fire blight including blossom blight and shoot blight. Pruning should occur at least 12 inches from the canker margin and into 2-year-old wood. If shoot blight is removed during the summer months, it may be worthwhile to remove any pruning stubs remaining from the summer pruning, as fire blight bacteria (E. amylovora) may have colonized the summer pruning wound. The best practice is to remove all pruning from the orchard and destroy. If this is not feasible, toss the pruned wood into row middles and mow. 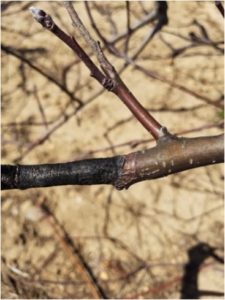 Canker resulting from a shoot blight infection by Erwinia amylovora

Orchard floor management is another important practice for reducing fungal inoculum during tree dormancy. Application of 5% urea to fallen leaves under the tree canopy has been found to reduce overwintering populations of the apple scab pathogen Venturia inaequalis and thus reduce apple scab incidence during the following growing season. Urea reduces overwintering fungal inoculum by stimulating microbial breakdown of leaves (the nitrogen in urea increases beneficial microbial population size). The practice of flail mowing is also effective for enhancing microbial breakdown of leaves as it increases the surface area of leaf tissue for microbial action. Often growers will combine both practices to achieve maximum benefit. Since the causal pathogens of Glomerella leaf spot also overwinter as perithecia on leaves, such practices should also reduce pressure for this disease. As trees are now approaching green tip, application of urea at this point likely will not be very beneficial and can be caustic to developing tissue (if drift occurs). If mitigation of overwintering inoculum is still a concern, growers may alternatively rake overwintering leaves from beneath the canopy into row middles and mow.

Although fire blight cankers are not yet oozing, chemical management of overwintering cankers should occur during the host phenology stages of late silver/green tip. During these growth stages, a full rate fixed copper (e.g. copper hydroxide, Kocide 2000 or 3000) should be applied with the mindset that residues will still remain when cankers begin to ooze around pink bud. Since copper ions can also result in phytoxicity to host tissue, it is not advised to apply high rates of copper after green tip. An added bonus: A copper application during late dormancy/silver tip can be used for DMI (FRAC 3) resistance management. 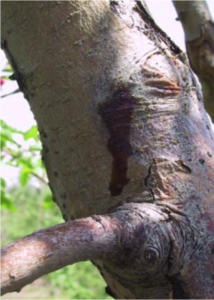 Apple scab is another disease that should be managed beginning at green tip. Around green tip, ascospores of the apple scab pathogen, Venturia inaequalis, begin to slowly mature. Provided an appropriate wetting period duration and temperature, ascospore dischage from overwintering structures (pseudothecia) could result in an infection event. If oil has been applied to trees (for insect control) consider an application of a half rate of mancozeb plus a single site fungicide such as Syllit (dodine), or and AP (FRAC 9) fungicide which tend to perform better in cooler weather. If you have access to a nearby NEWA weather station, forecasting model for ascospore maturity and primary infection events can be accessed at www.newa.com.