Find this article at:
go.ncsu.edu/readext?784592
— Written By Lina Quesada-Ocampo (3 months ago) 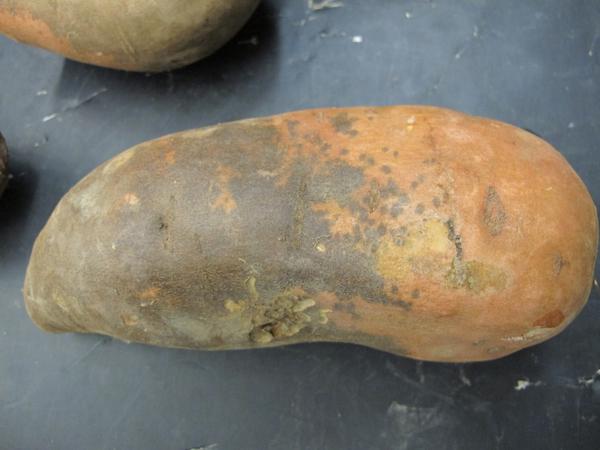 Sweetpotato scurf is caused by the soilborne fungus Monilochaetes infuscans. Under high humidity conditions either in storage or after heavy rainfall in the field, the fungus infection progresses. The fungus does not affect the edible quality of the sweetpotato, however, its market value is considerably reduced. If sweetpotato roots infected by scurf are used for seed production, slips will potentially become infected and carry the disease to production fields. This scenario is more likely if slips are pulled instead of cut above the soil line and if tools are not properly sanitized. During the growing season if slips are infected, the fungus travels down to the storage roots and is later carried to curing rooms after harvest. In the field, the scurf pathogen survives in soil for only 1-3 years, depending on soil type. Thus, a 3-year crop rotation can be an effective strategy as part of an integrated management approach. The disease is less prevalent in light, sandy soils and worse in heavy soils especially those containing considerable amounts of organic matter.

No resistant varieties are available, therefore avoidance strategies must be put in place to prevent losses due to sweetpotato scurf. Growers should remain vigilant when selecting seed roots for bedding. Wetting the roots makes scurf spots easier to see. Applying effective fungicides to the seed roots, following label instructions, can protect early against severe disease during postharvest. When harvesting slips cut above the soil level to prevent fungal infections. Treating slips with effective fungicides following label instructions will protect vulnerable tissue until the slips are fully rooted and less susceptible to disease, especially in fields with a history of scurf. No fungicide is effective at controlling this disease after scurf has become established. Preventive fungicides for use on seed roots during bedding include Mertect (thiabendazole), Botran (dicloran), Maxim 4FS (fludioxonil), and Dynasty (azoxystrobin). To prevent introducing scurf into your fields we recommend using certified seed for planting production fields.

If you think you may have sweetpotato scurf in your roots and need assistance with diagnostics or management, please contact your local Extension agent and send physical samples and/or photos to the Plant Disease and Insect Clinic. For additional management options, please refer to those listed in our disease factsheet.