Find this article at:
go.ncsu.edu/readext?303481
— Written By Lina Quesada-Ocampo

Cucurbit downy mildew, caused by the oomycete Pseudoperonospora cubensis, is a yearly concern for North Carolina cucurbit growers. Having the most effective fungicide products at hand to control this disease is key since no resistant cultivars are available for disease control. In addition, the reproductive nature of this pathogen allows it to quickly overcome fungicides when such products are applied without the proper active ingredient rotations, thus, having the latest results on fungicide efficacy is an invaluable tool for growers. To address this need, the Vegetable Pathology Lab at NCSU conducted several fungicide efficacy trials last year that provided the needed information to manage cucurbit downy mildew this year in North Carolina.

One trial was conducted at the Cunningham Research Station in Kinston, NC, using Vlaspik cucumbers, which are susceptible to downy mildew. Fungicide treatments were applied on a 7-day interval from September 9 to October 14 and included the following products:

To assess individual efficacy of each product, fungicides were applied as single-treatments at high and low rates following label guidelines (Figure 1). Details of rates used for each product and how applications were made can be found here. Please note that this was done for research purposes only to provide our stakeholders with the efficacy information they need, however, growers are strongly recommended to rotate fungicides in a spray program to avoid generating fungicide-resistant isolates. The trial was initiated late in the growing season to ensure availability of inoculum and to quickly destroy the trial once completed to eliminate it as a source of inoculum. The pathogen requires a host to live, it cannot persist in the soil and thus, it cannot survive winter temperatures in the field.

Disease severity and marketable fruit yield were recorded at the end of the trial on October 17 for each treatment and are shown in Figure 1. Treatments labelled with the same letter are not statistically different. For example, all treatments not labelled with the letter a, which corresponds to the non-treated control, presented significantly less cucurbit downy mildew disease. 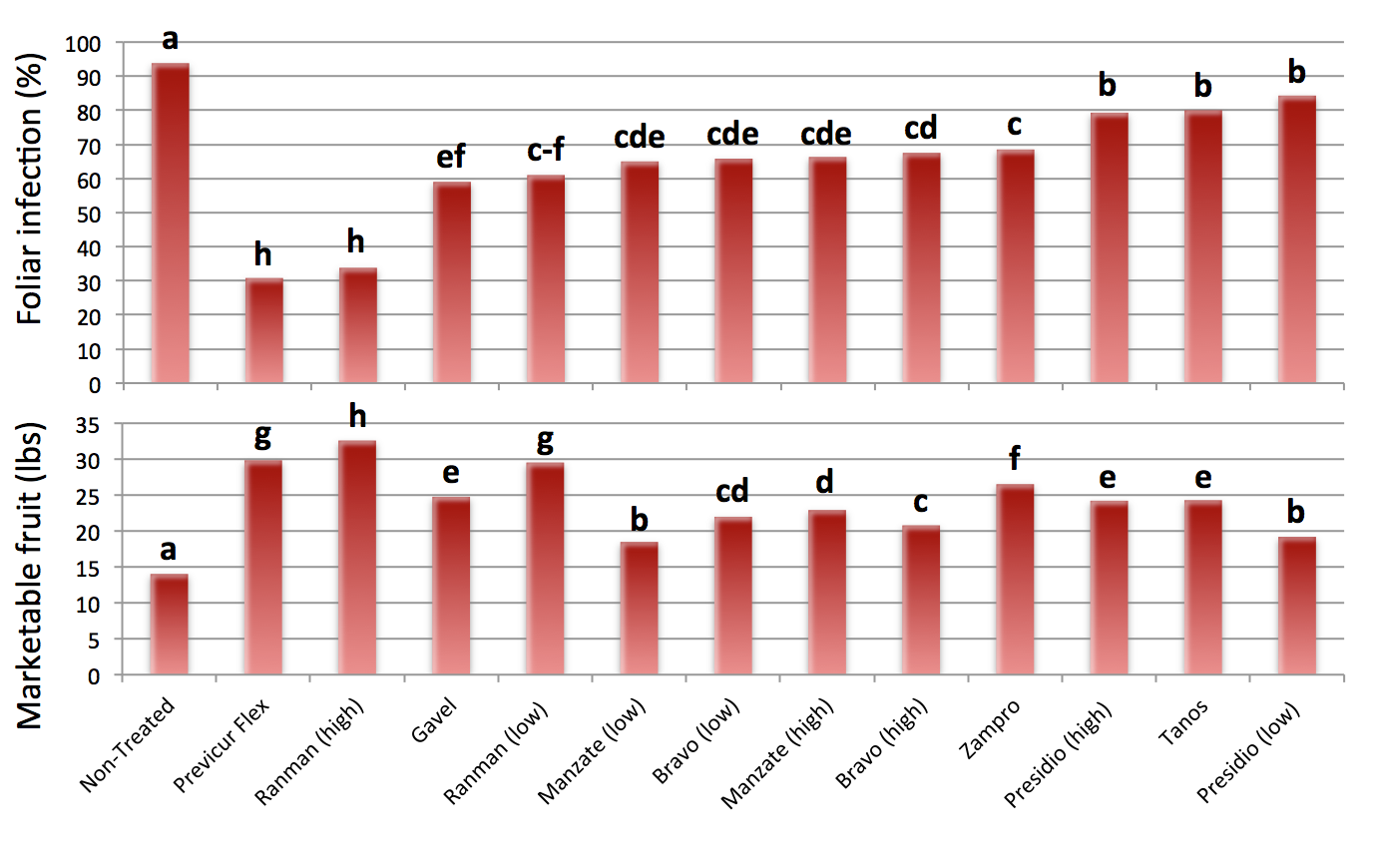 Disease pressure for the trial was significant (>90%), which allowed for identification of effective treatments. Previcur Flex (1.2pt) and Ranman (2.75 fl oz) applied at high rates provided the highest disease control of all treatments and presented approximately 30% disease at the end of the trial. Other treatments also provided good to moderate control of cucurbit downy mildew and presented approximately 60-70% disease.

A second set of treatments were included in the trial and corresponded to the same products shown in Figure 1 but applied in a rotation program to determine which fungicide rotations are most effective in controlling cucurbit downy mildew (Figure 2). All products, with the exception of Gavel since it contains mancozeb, were tank-mixed with Bravo Weather Stick and alternated following recommendations to prevent appearance of fungicide-resistant isolates. Details of rates used for each product and how applications were made can be found here. Disease severity and marketable fruit yield were recorded as described above, and as in Figure 1, treatments in Figure 2 labelled with the same letter are not statistically different. 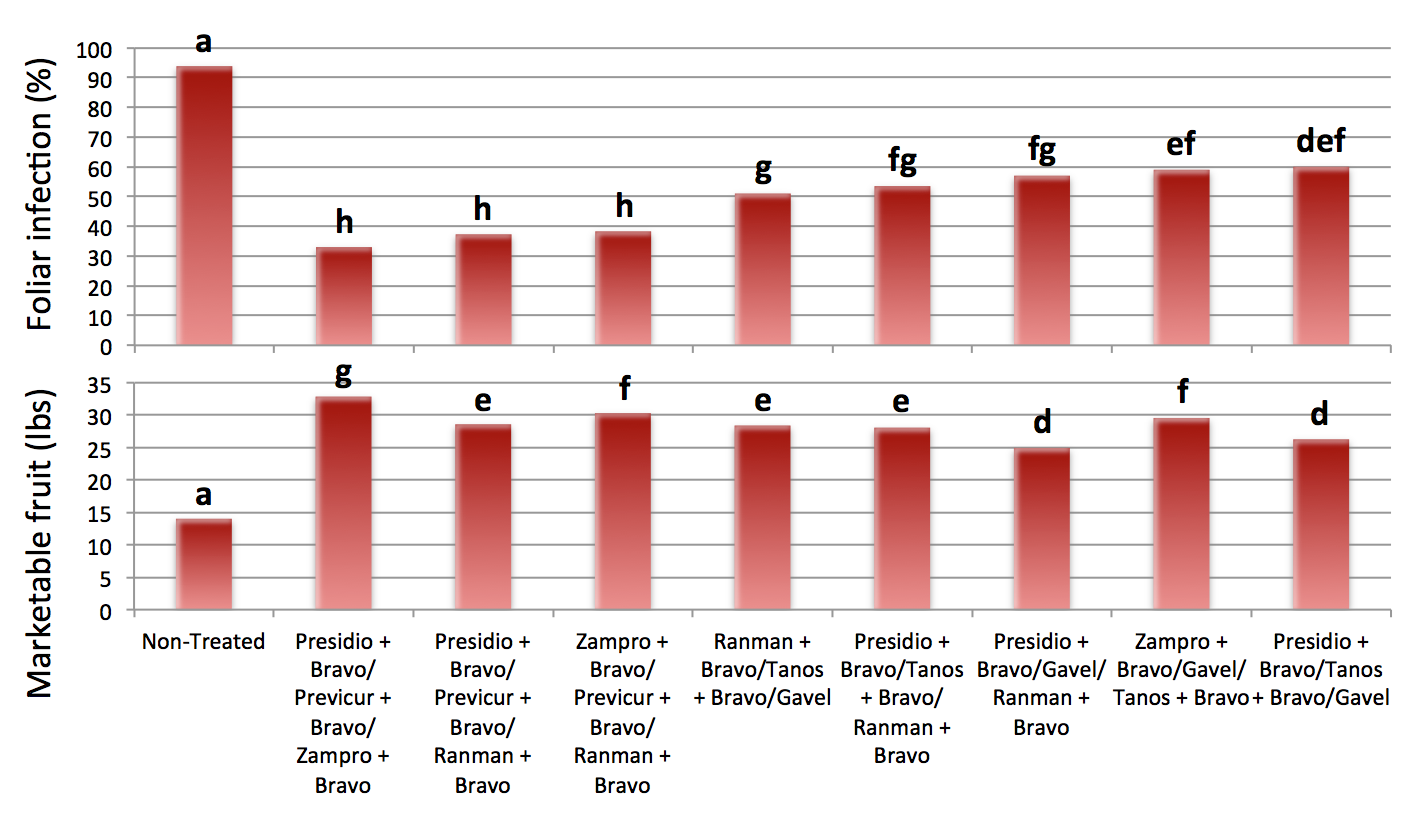 Treatments alternating Presidio, Previcur Flex, Zampro, and Ranman, provided the highest level of disease control and presented approximately 30% disease at the end of the trial. Other programs also provided good control of cucurbit downy mildew and presented approximately 50-60% disease. It is interesting to note that in this trial Presidio, used as a single product, provided little control; however, in the same trial when Presidio was used as an initial spray in a spray program that alternated other products with good to moderate performance, disease control was achieved.

It is important to remember that Pseudoperonospora cubensis, the causal agent of cucurbit downy mildew, can generate fungicide resistance very quickly. Presidio has provided excellent control of the disease in past years and its only recently that we have observed loss of sensitivity to this product in pathogen populations. It is critical that growers alternate products in their fungicide programs to protect the few chemistries we have that are still highly effective in controlling downy mildew. Because the pathogen can travel long distances and it reproduces profusely during the growing season, if fungicide-resistant isolates are generated due to misuse of fungicides, they could spread quickly to other regions. Using fungicides appropriately to avoid generating fungicide-resistant isolates will ensure the long term profitability of our cucurbit industry.

When planing your spray program, make sure you alternate fungicide groups of products to avoid generating fungicide-resistant isolates. You can find some example products on our Cucurbit Downy Mildew fact sheet. Growers are encouraged to read the Southeastern US Vegetable Crop Handbook for the latest fungicide recommendations.

If you think you have cucurbit downy mildew in your cucurbits please contact your local Extension Agent and send photos and/or physical samples to the Plant Disease and Insect Clinic for confirmation and reporting to the Cucurbit Downy Mildew ipmPIPE.