Find this article at:
go.ncsu.edu/readext?310039
— Written By Lina Quesada-Ocampo

Several basil growers, homeowners, and garden centers have reported outbreaks of basil downy mildew to the Vegetable Pathology Lab at NCSU. Over 100 outbreaks across the United States (US) have been reported to a tracking system set up by Cornell University in a google document. Additional information for this effort can be found on a basil downy mildew information website created by Dr. Margaret McGrath. This year in North Carolina, we have confirmed outbreaks in Wake, Chatham, New Hanover, Orange, Mecklenburg, Alamance, Buncombe and Johnston Counties.

Downy mildew has become a yearly challenge for basil growers since 2008. It has been reported in several states and much like cucurbit downy mildew, it comes to North Carolina every year once environmental conditions are favorable for disease. Basil downy mildew is caused by the oomycete pathogen Peronospora belbahrii (Figure 1). Symptoms of the disease can be mistaken by nutritional problems since they manifest as a yellowing or browning of leaves (Figure 2). However, if the abaxial side of the leaf is inspected, profuse, dark sporulation will be covering the surface of infected leaves (Figure 3). Usually, the sporulation is obvious enough that it can be seen without a microscope or hand lens, however, when you take a closer look at the sporulation on the leaf with a hand lens or dissecting microscope, you will be able to see the typical sporangiophore structures bearing sporangia found in downy mildew pathogens (Figure 4). 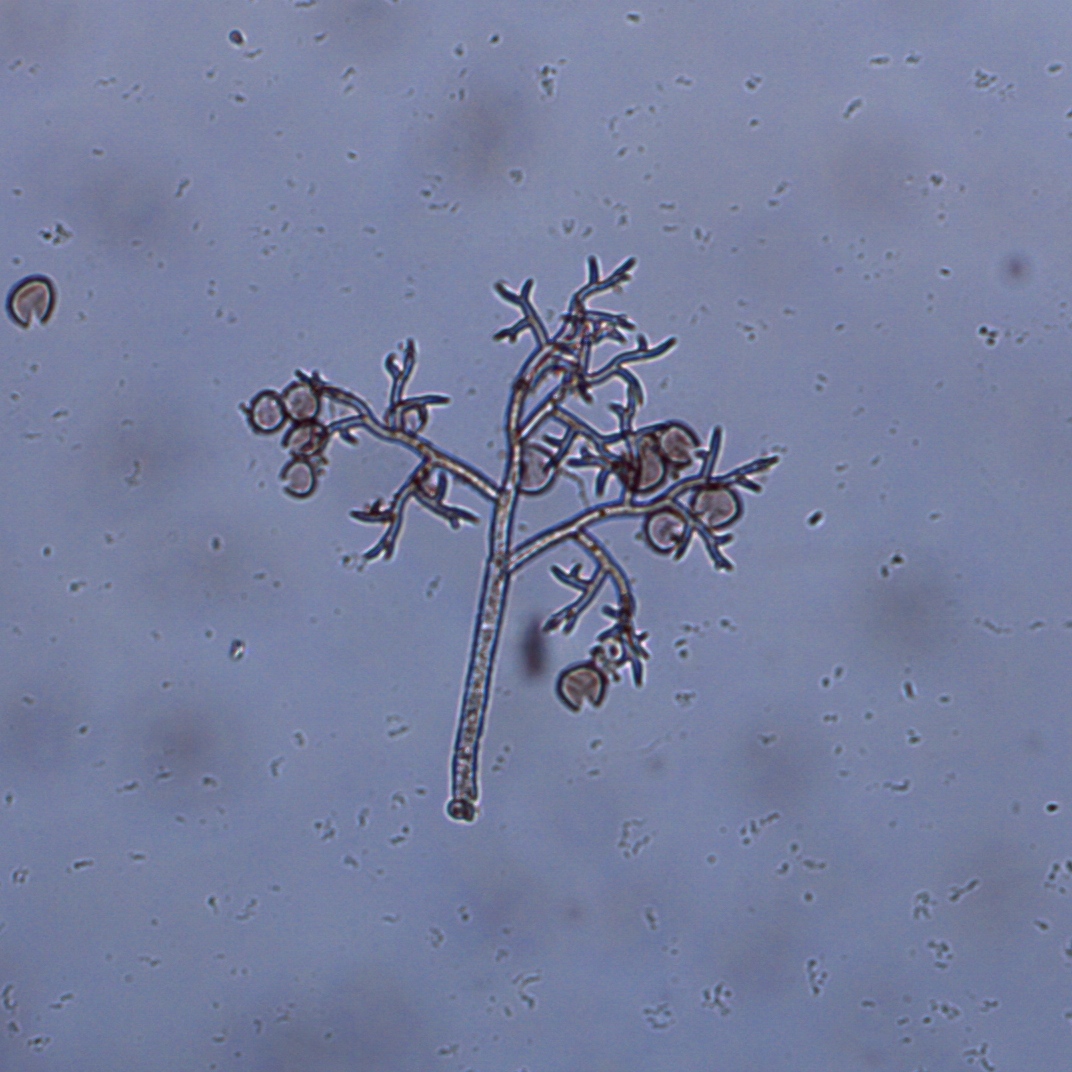 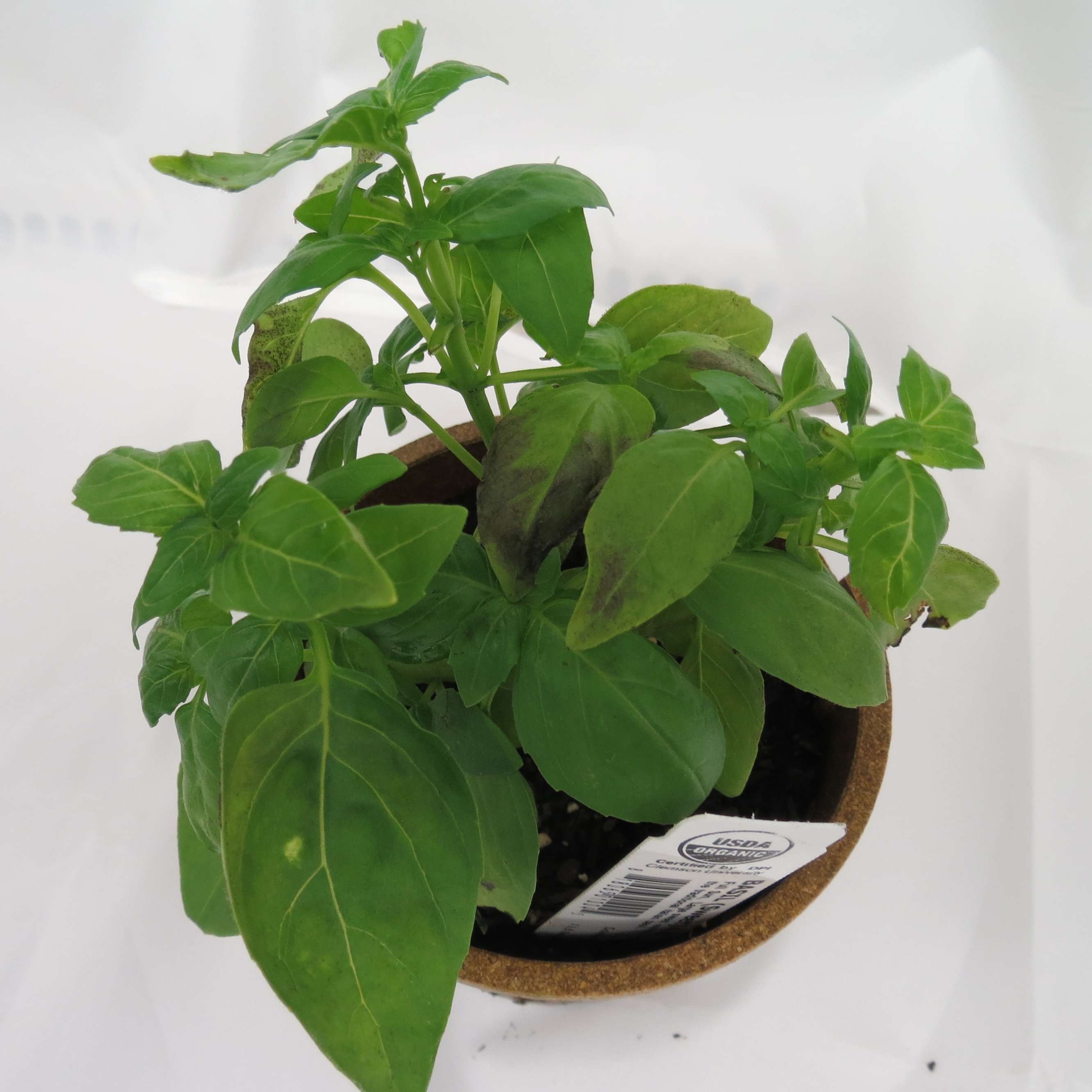 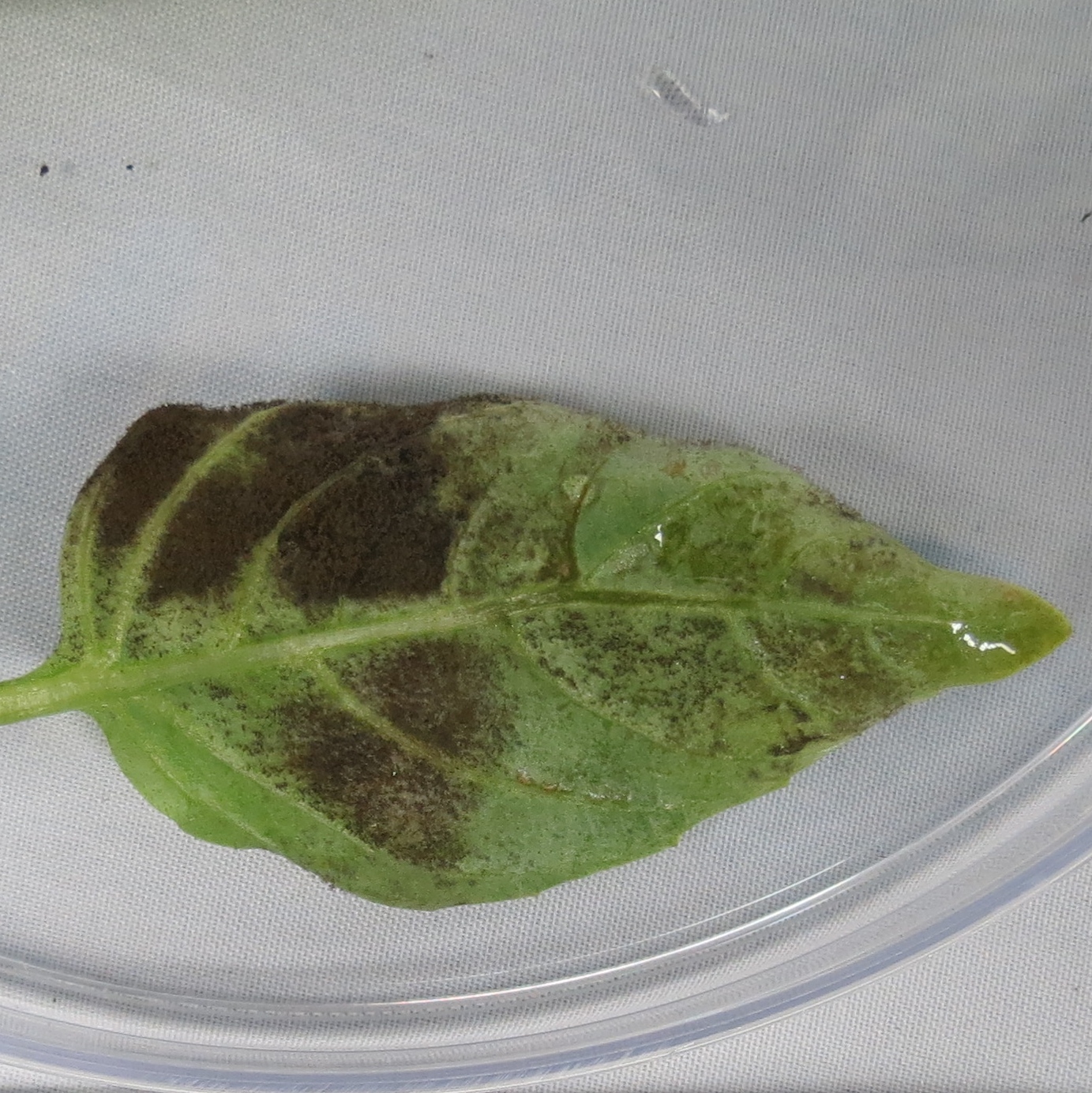 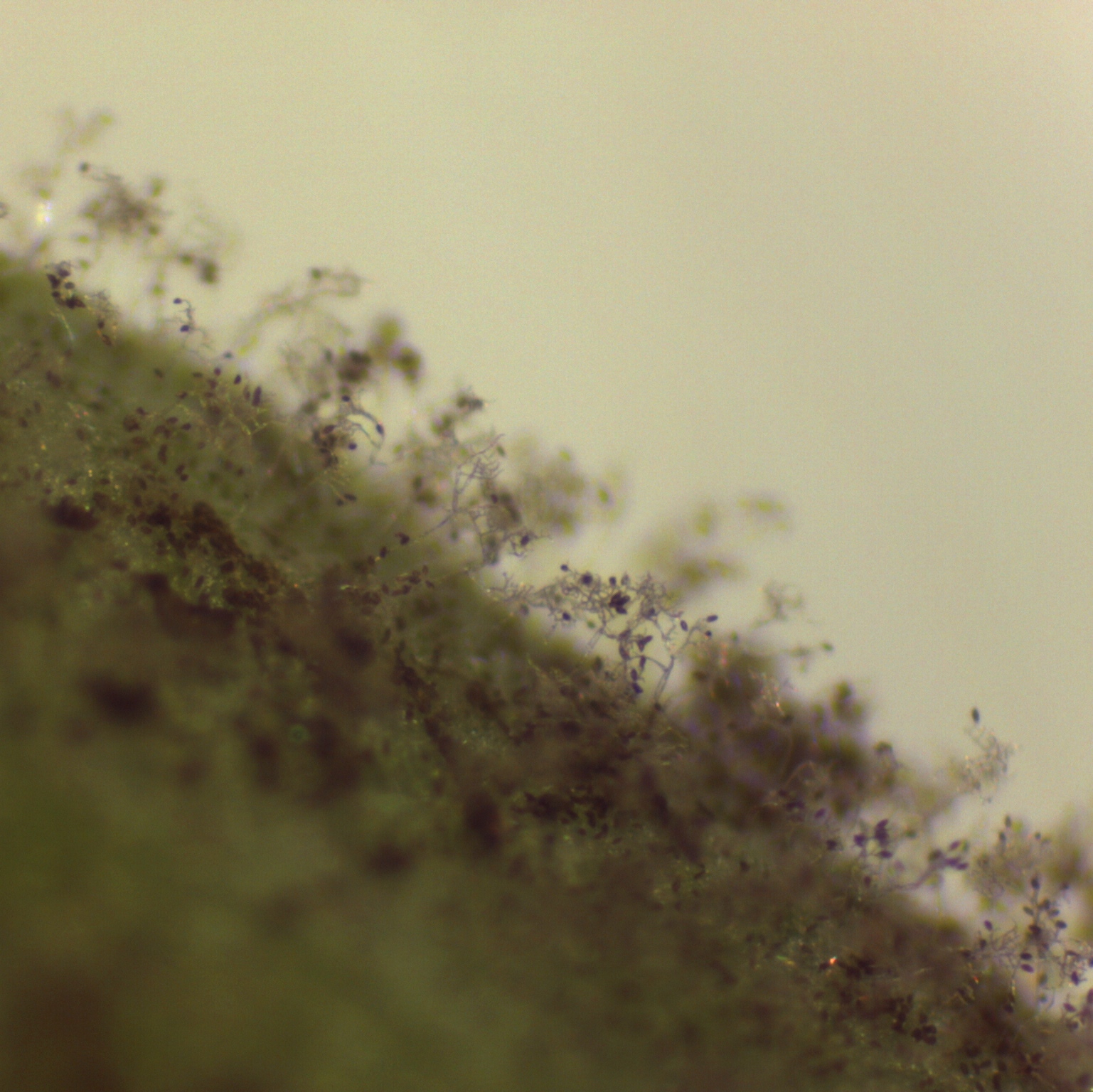 Peronospora belbahrii produces airborne spores and can also be seedborne, and like other oomycetes, such as Phytophthora and Pythium, this downy mildew pathogen thrives in humid conditions. Using pathogen-free seed is essential to prevent basil downy mildew and if the disease becomes established in your operation, consider removing infected plants to eliminate them as a source of inoculum. Reducing moisture by using drip irrigation vs. overhead irrigation, watering early in the mornings so foliage dries quickly, and allowing enough space between plants to increase air circulation will also help control this pathogen.

Application of fungicides is the most effective strategy to control basil downy mildew. Conventional products labeled for basil with active ingredients (a. i.) that have shown efficacy in controlling downy mildew include: Ranman (a. i. cyazofamid, FRAC code 21), Revus (a. i. mandipropamid, FRAC 40), Quadris (a. i. azoxystrobin, FRAC 11, not for greenhouse use), and ProPhyt (a. i. phosphorous acid, FRAC 33). Organic products including Actinovate (a. i. Streptomyces lydicus), Double Nickel 55 (a. i. Bacillus amyloliquefaciens), MilStop (a. i. potassium bicarbonate), Regalia (a. i. Reynoutria sachalinensis), Trilogy (a. i. neem oil), and OxiDate (a. i. hydrogen dioxide) are labeled for basil, however, efficacy data does not show high level of control with these products. Regardless of the product, it is important to apply them in a way that you achieve good coverage on both sides of the foliage, and that you apply the products before disease begins. Fungicides are most effective when applied in a preventive, weekly spray program.

With the arrival of basil downy mildew in North Carolina this year, we encourage commercial growers and homeowners alike to be diligent in checking basil leaves for downy mildew. If you think you have downy mildew in your basil please contact your local Extension Agent and send photos and/or physical samples to the Plant Disease and Insect Clinic so we can assist you with diagnosis of the disease. If  downy mildew is confirmed in your samples by an expert, please consider making a report to warn others that the pathogen is in the area. The report can be anonymous so that only the county information is provided.