Find this article at:
go.ncsu.edu/readext?367434
— Written By Barbara Shew and last updated by Carol Hicks 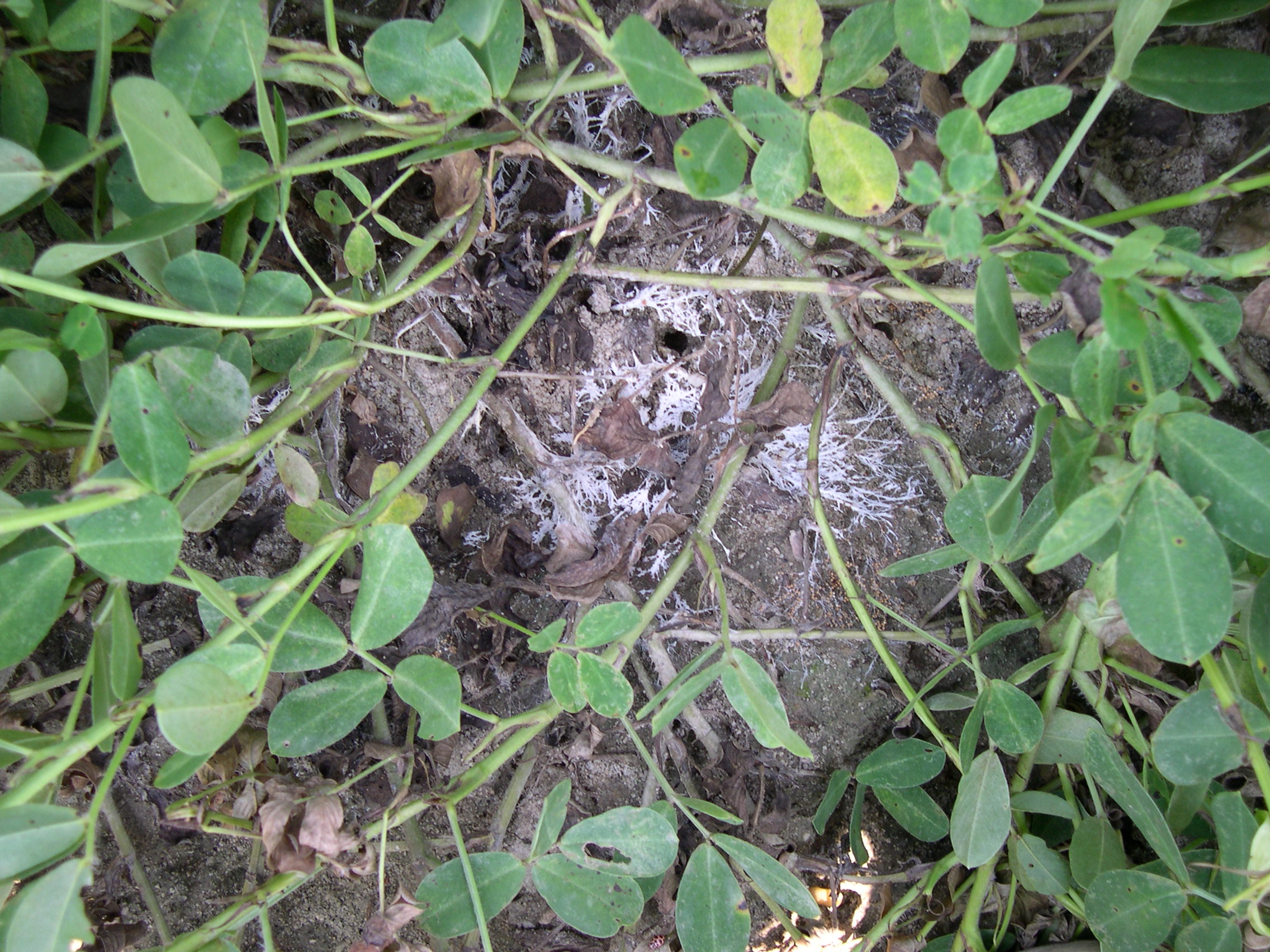 Signs and symptoms of southern stem rot on peanut

Symptoms of stem rot include wilting, starting with single branches, and slightly sunken brown lesions (dead areas) on stems or crowns where they come in contact with the soil. The coarse, fan-shaped growth of the fungus may be visible on the soil surface and affected plant parts. Round tan-to-brown sclerotia about the size of bb’s may also be present. However, damage can occur underground even when symptoms or fungus growth are not evident, which is why we recommend routine use of fungicides that control this disease. Other important control measures include planting a partially resistant cultivar (Bailey), and avoiding rotations of peanuts with vegetables, melons, tobacco, or soybeans.

During the period from mid-July to late August, susceptible cultivars will benefit from two applications of a fungicide that controls stem rot, while the more resistant Bailey will benefit from at least one application. Among the leaf spot fungicides that will also control southern stem rot are Provost, Fontelis, Abound, and Headline. We are still evaluating Priaxor against stem rot, but expect it to perform at least as well as Headline. Note that for most of these fungicides, the rates needed to control southern stem rot are higher than those needed for leaf spot control alone.

Convoy and tebuconazole also are effective against stem rot but must be used with a fungicide that controls leaf spots. If you are using Convoy or tebuconazole, mix with at 1 to 1.5 pints per acre of Bravo (or generic chlorothalonil) or 6 to 9 oz per acre of Headline. Remember that only two applications of a group 11 fungicide (Headline, Abound, Priaxor, Evito, or generic equivalents) should be made per season.

Rainfall across North Carolina’s peanut production region has been variable. Many areas have had ample or excess rain, but rain has been below normal in others. In general, plants suffering from water stress are a good indication that conditions are not favorable for leaf spot. Applying a leaf spot fungicide in dry weather is unnecessary and can increase the risk or severity of spider mite outbreaks. Delay fungicide applications until leaf spot advisories indicate that conditions are again favorable for disease.

Sclerotinia blight has been found in some of the wetter parts of the state and conditions remain favorable in those areas. Fungicide sprays are most beneficial at the first sign of a disease outbreak. Keep your eye on Sclerotinia advisories but always rely on careful, regular scouting to stay on top of this disease.