Find this article at:
go.ncsu.edu/readext?531041
— Written By Inga Meadows

As the flooding recedes in western North Carolina, many growers are now reporting losses due to Phytophthora diseases on various vegetable crops including pepper, tomato, cucumber, and other cucurbits. Many vegetable fields were reported as flooded, and several were under water for some period of time. These conditions (flooding, standing water, and high amounts of rainfall) are conducive for Phytophthora diseases. 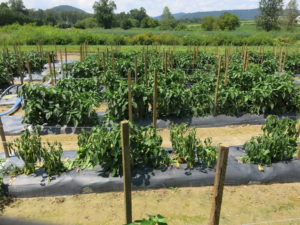 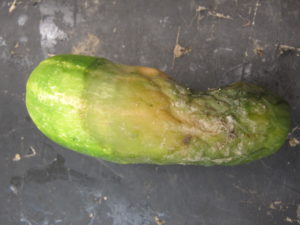 On pepper, cucumber, squash, and other cucurbits, Phytophthora capsici (Pcap) can cause root rot, stem and leaf lesions, and fruit rot. Symptoms include overall plant wilting, tan to brown lesions on leaves and stems, water-soaked or cleared lesions on the underside of the leaves, and rot on fruit that may have a fuzzy, whitish appearance, which is the spores of the pathogen. 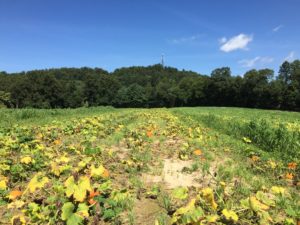 On tomato, P. nicotianae (Pnic) and Pcap can cause leaf and stem lesions and fruit rot. Lesions caused by Pnic and Pcap resemble late blight (caused by P. infestans), but they are not the same disease. In fact, late blight has NOT been reported in NC as of June 5, 2018. Spores of Pnic and Pcap travel only locally (within a field) and by movement of infested soil, as opposed to late blight, which travels long distances by wind and air currents. Although the risk of spread to adjacent fields is lower for Pcap and Pnic, it is still very important to wash soil off of equipment that was used in an infested field to avoid spreading the disease to non-infested fields. 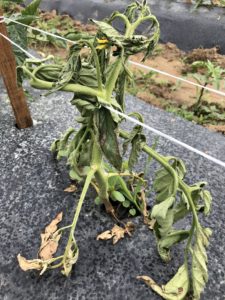 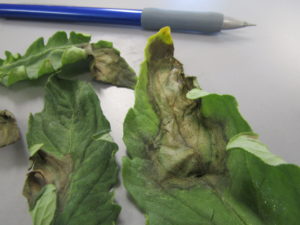 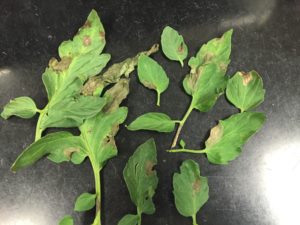 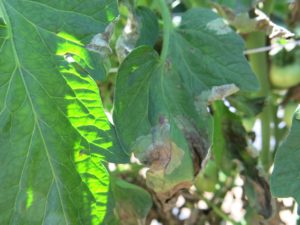 If you suspect your crop is affected by Phytophthora, contact your local extension agent, agronomist, or send samples directly to the NCSU Plant Disease and Insect Clinic to be sure you get a proper disease diagnosis.