Find this article at:
go.ncsu.edu/readext?538968
— Written By Inga Meadows 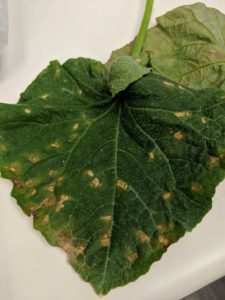 Cucurbit downy mildew (CDM) was confirmed on a cucumber leaf from a commercial field in Henderson County on July 20, 2018. This is the first report of CDM in western NC; however, the disease has been present in NC since May 30, 2018.

UPDATE: Cucumber downy mildew was confirmed on cucumber in sentinel plots in Waynesville, NC on July 24, 2018.

Symptoms were typical of downy mildew, including angular chlorotic lesions on the leaves and a grayish-brown “downy” appearance on the underside of the leaves. Structures of the oomycete Pseudoperonospora cubensis, the causal agent of CDM, were identified using dissecting and compound microscopes, confirming the disease.

Upon detection, growers should use intensive spray programs every 5-7 days, especially if weather conditions are conducive (wet and cool). The downy mildew pathogen can become resistant to fungicides quickly and it is important that growers alternate products in their fungicide management programs and tank mix with a protectant upon every application. This will protect the few chemistries that are still highly effective in controlling cucurbit downy mildew. Effective fungicides can be found in our Cucurbit Downy Mildew fact sheet. 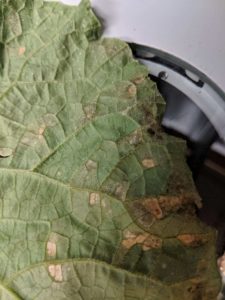 We also encourage commercial growers and homeowners to be diligent in checking cucurbit leaves for downy mildew and reporting the disease to the Cucurbit downy mildew IPM pipe website (CDM ipmPIPE). These reports are anonymous and crucial in warning growers throughout the east coast of an outbreak. If you think you have cucurbit downy mildew, please contact your local Extension Agent and send photos and/or physical samples to the NC State University Plant Disease and Insect Clinic.