— Written By Mike Munster and last updated by Inga Meadows

The downy mildew pathogen Plasmopara halstedii was found causing leaf spotting and leaf death on a sample of coreopsis ‘Solana Golden Sphere’ submitted to the NC State Plant Disease and Insect Clinic. This disease is unrelated to the common and familiar powdery mildew of coreopsis. It belongs to the same genus as the downy mildew pathogen on impatiens, but has a different host range. It is also different from the downy mildew diseases of basil and cucurbits. In North Carolina, we’ve seen downy mildew caused by Plasmopara halstedii on sunflower, Rudbeckia, Gazania, and Coreopsis. The main symptoms are leaf spots, which may or may not be angular in shape, advancing to complete leaf death. In sunflower, downy mildew can be systemic and can cause stunting and a bright yellow coloration at the base of young leaves, following the veins. 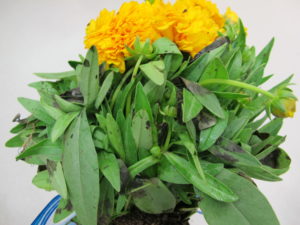 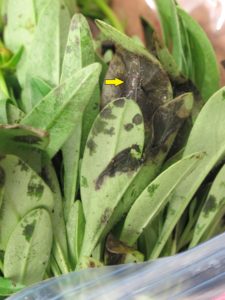 Symptoms and signs (arrow) of downy mildew on coreopsis

Since many agents can cause leaf spots, it’s important to confirm the presence of downy mildew by observation of the signs of the pathogen, which, in this case, consist of sporangia and sporangiophores (spores and spore-bearing structures) produced on the undersides of leaves. These may be abundant enough to be visible to the unaided eye as fine white grains. In contrast, note that powdery mildew does not cause necrosis (leaf death) so quickly and can produce spores on both the upper and lower leaf surfaces. 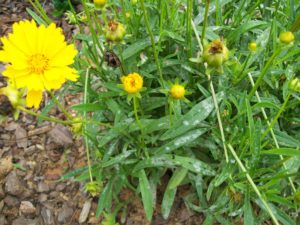 Carefully inspect all liners/transplants for symptoms and signs of this disease. Avoid excess leaf wetness by timing irrigation and ventilation of greenhouses so as to avoid extending overnight leaf wetness periods. Fungicides may be needed in the greenhouse or nursery. See pp. 501-502 of Table 10-11 in the Disease Control chapter of the 2019 North Carolina Agricultural Chemicals Manual for an extensive listing.