Find this article at:
go.ncsu.edu/readext?614630
— Written By Inga Meadows

Cucumber Downy Mildew (CDM) has been confirmed on cucumber samples from our sentinel plot in Waynesville, NC (Haywood County) and from commercial growers in Burke and Henderson Counties. Approximately 75-100% of plants were affected. Leaves showed symptoms typical of CDM: angular, chlorotic or yellow lesions on the upper surface of the leaves with gray to black spores on the underside of the leaf.

Update (8-20-2019): Downy mildew has been confirmed on acorn squash in our sentinel plots in Waynesville, NC (Haywood County).

Update (8-13-2019): Downy mildew has been confirmed on pumpkin, butternut squash, and canteloupe in our sentinel plots in Waynesville, NC (Haywood County). Check the Cucurbit Downy Mildew IPMPipe to see an updated outbreak map. 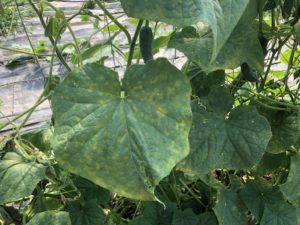 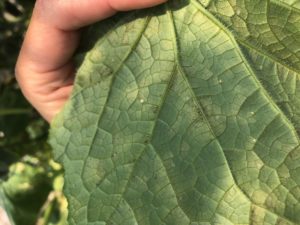 Growers in western NC are advised to implement management strategies. Effective fungicides can be found in the Southeastern US Vegetable Crop Handbook. More information can be found on the cucurbit downy mildew disease fact sheet.

This pathogen can rapidly become resistant to fungicides so, it is important to rotate fungicide groups and use tank mixes with protectants to minimize the risk of fungicide resistance.

Cucumbers and cantaloupes are generally more susceptible to the disease than squash, watermelon, and pumpkin. Because this pathogen travels through air currents, it can spread rapidly. Therefore, it is important that growers report outbreaks so other growers in the area can implement management strategies.

You can track the spread of CDM and report outbreaks anonymously on the Cucurbit Downy Mildew IPM PIPE (CDM ipmPIPE). If you see symptoms of CDM in your cucurbits, please notify your local Extension Agent to assist in diagnosis and to help you send a sample to the Plant Disease and Insect Clinic.