Find this article at:
go.ncsu.edu/readext?699441
— Written By Lina Quesada-Ocampo

Cucumber downy mildew (CDM) was confirmed on a cucumber sample from a production field in Wilson County on June 8 of 2020. Leaves presented approximately 20% disease (Figure 1 and 2), and 30% of the field was affected. 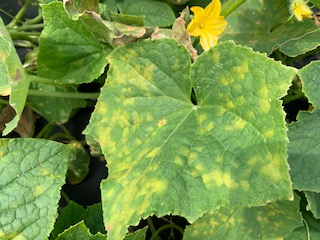 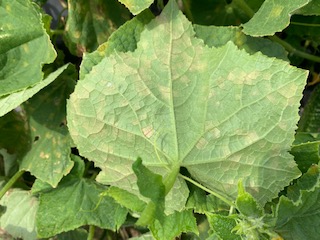 Angular, chlorotic lesions on the upper surface of cucurbit leaves and gray sporulation on the underside are characteristic symptoms and signs of CDM (Figure 1). For confirmation, sporangiophore structures typical of the causal agent (Pseudoperonospora cubensis), were observed on the underside of the leaf using a hand lens (Figure 2).

Due to this pathogen becoming resistant to fungicides quickly, it is critical to have a robust spray program that alternates effective modes of action and tank mixes with protective chemistries to reduce the build-up of fungicide-resistant isolates. Results from our annual fungicide efficacy trials in North Carolina have revealed differences in fungicide efficacy between clade 2 and clade 1 P. cubensis isolates, thus, please refer to our cucurbit downy mildew fact sheet for effective chemistries for each isolate type depending on your cucurbit crop.

If you think you may have CDM in your fields, please contact your local Extension Agent and send physical samples and/or photos to the Plant Disease and Insect Clinic. Upon confirmation, please make a completely anonymous report to the Cucurbit downy mildew IPM website. Management of CDM remains a community effort because it is an airborne pathogen that can travel from state to state through wind currents. We encourage growers and homeowners to actively scout cucurbit leaves for downy mildew throughout the season.

Register with the CDM IPM PIPE to receive texts, emails and/or phone alerts when new disease outbreaks are reported near you.